Your Work... Improved My Back 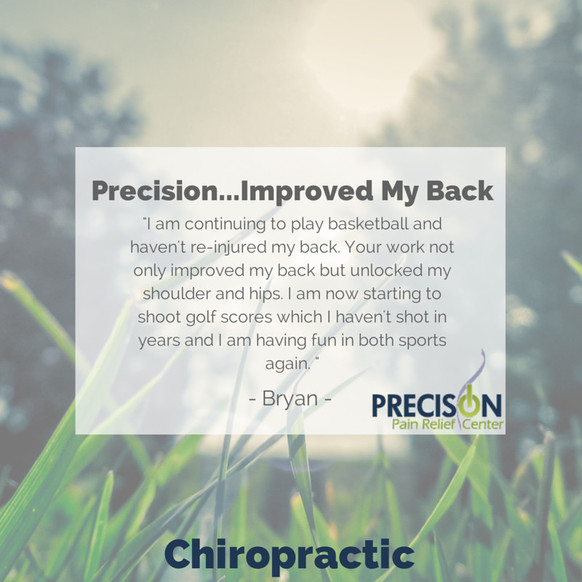 Don,
I just wanted to give you a little history about my situation before starting to see you about four months ago. I have always been involved in athletics. Growing up I developed into a decent golfer and won quite a few tournaments including the State of Wisconsin USGA Junior Championship. I played high school basketball as well and probably could have played at a small college if I desired. Although I continued to casually play golf over the years, I quit playing basketball after high school until I was in my late 20s. I resumed basketball because I truly enjoy the game and it was a great way to stay in shape.
When I was 35, I started playing in basketball leagues four times a year and sometimes as much as three leagues, four times a year. Over time, my participation in sports took a toll. I hurt back on and off over time, but always assumed it was a muscle problem. I would either play through it or rest a bit and then resume my participation. When I was approximately 45, I hurt my back such that I actually went to see an Orthopedic MD. I had an MRI done the results of which indicated three bulging discs. The doctor had me go through physical therapy and rest. He actually said I should quit playing basketball altogether. Well, I didn't quit and I continued to hurt myself on and off such that I would rest and resume play. I also continued to play golf and my handicap rose over time to a level which was totally frustrating and embarrassing.
Around that time, I spoke with a person who had quit playing basketball due to a back injury a few years earlier and then he reappeared in our league. He told me about you and how you got him well. I kept your name for seven or eight years but never called. Then my wife hurt her back and I sent her your way. You got her well in exactly the time frame you mentioned. Around four months ago, during the last minute of a basketball game while basically doing nothing, I hurt my back such that I missed the rest of the season. I also couldn't swing a golf club. I made an appointment to see you and you figured out what my problem was, told me what would be involved to fix it and also said I could continue playing both golf and basketball. Most importantly, you gave me hope.
Fast forward to the present...I am continuing to play basketball and haven't re-injured my back. Your work not only improved my back but unlocked my shoulder and hips. I am now starting to shoot golf scores which I haven't shot in years and I am having fun in both sports again. It is easy for others in the medical profession to telone to quit doing something they enjoy and that will solve the problem. You have allowed me to continue to get better in a non-invasive way and also continue to do what I enjoy doing. I thank you so much for all of your help and look forward to seeing you soon.
Best wishes,
Bryan